The story so far

Two things left: Updating, and logging in. Let's do updating. You can try a new version of the ship app.

Here's the new admin page, with Edit buttons, as well as delete buttons. 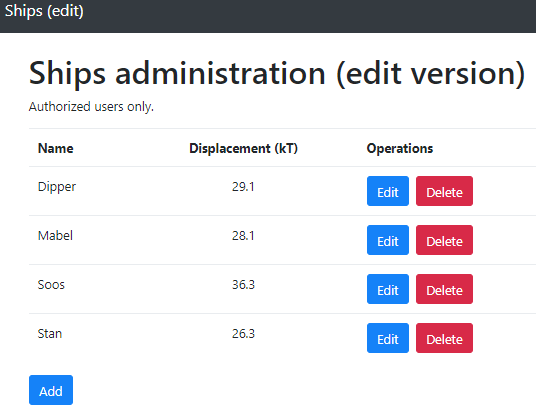 (The image is zoomed out to make it smaller.)

You can try it. Remember, you have to initialize the data first.

How does this compare to the previous version? 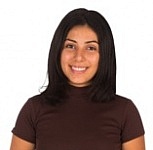 Adela
The only difference is the edit button for each row.

I'm guessing it's made in the same way as the delete button?

Yes, it is. Here's the delete button code:

It calls editShip(), not deleteShip(), and it looks a little different, but it's basically the same thing.

Before we go into the code for editShip(), we need to talk about something else. 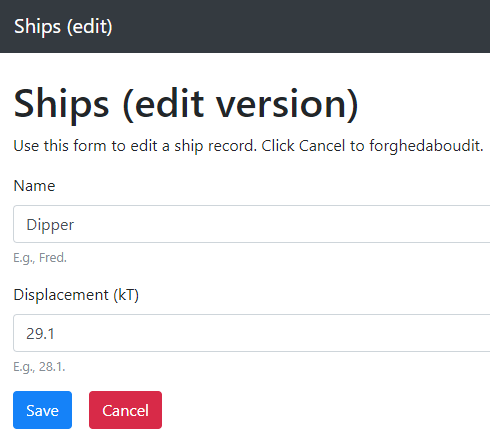 Georgina
Wait, that's almost the same as the add form from last time.

What does the add form for this new app look like? 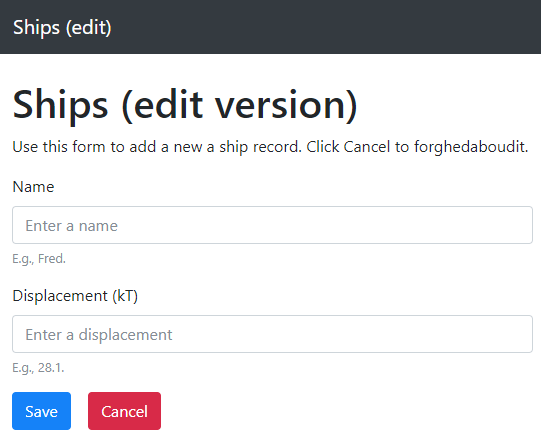 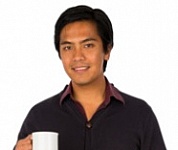 They're almost identical. Ignoring the different headings, which are only so we call the apps apart, there are only three differences between the edit and add form. Here's the edit form again, with the differences highlighted: 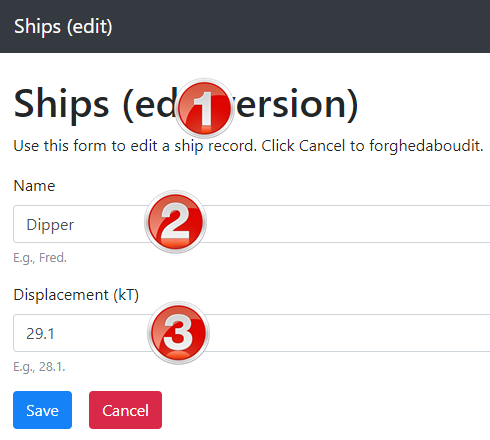 You can try it.

We could make two pages, one for add, and one for edit. But let's try something different. Let's make one form. We'll call its file new-edit-item.html. We'll use it for both purposes.

The form can do two operations on the data: the add operation, and the edit operation. But it can only do one at a time.

When the form loads, it has to know what operation the user wants: either add, or edit. How do we do tell the form which one?

Five of the buttons will jump to new-edit-item.html. 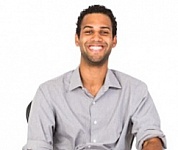 Marcus
Oh, I see where this is going!

Click on the Add button, and new-edit-item.html gets ready to add a new record.

Click on any of the edit buttons, and new-edit-item.html gets ready to edit a record.

There are several ways we could tell new-edit-item.html what operation the user wants. Let's so what we already know: localStorage.

Here's code for the Add and Edit buttons on the admin page:

The add button is static HTML. The Edit button is created by JS code in a loop, with one button for each record.

Both functions set the operation key in localStorage, to either 'new', or 'edit'. When it loads, new-edit-item.html can check operation, to see what the user wants to do.

If new-edit-item.html is to edit a record, it needs to know what record the user wants to edit. Fleet.editShip() sends that through localStorage, in the shipIdToEdit key.

Adela
Cool! So when the page with the form loads, it checks operation, and sets itself up.

Right. Here's a diagram of that. 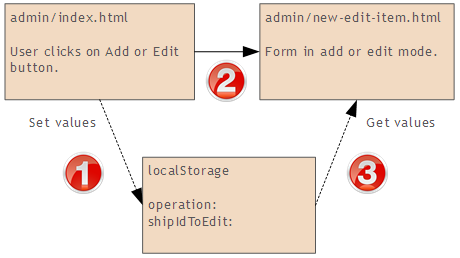 When the add/edit form loads

As a reminder, here are the differences between add, and edit:

Lines 4 to 7 connect Taffy to localStorage as usual.

Line 9 checks if the user wants an edit operation:

If it is, line 11 shows instructions:

This is where form-purpose is defined:

Since this is an edit, the record's current data needs to be put into the form. First, the browser gets the id of the record from localStorage (line 14):

Then it tells Taffy to lookup that record (line 16):

Taffy returns an array of records. The first element contains the record. So (line 17):

You don't need to understand the deets. Just copy-and-paste this line.

What if it's an add operation?

The only thing we need to do it set the instructions. The form fields are empty already, which is what we need for a new record

Here's the form again (it happens to be in edit mode).

What happens when the user clicks one of the buttons?

The Cancel button is easy.

The Save button is more complex, though much of it we've done before. Here's the pseudocode:

Here's some code: The jump to index.html is after the if. That means it happens after an add, or an edit.

Let's look at the edit code. We need to change the existing record to the data in the input fields. You can try the app.

First, we make an updated record. Recall that records have three fields:

The id we can get from localStorage. The others are in variables we've already validated. So this will make an updated record:

Next to update the DB with the new record:

Fleet.fleetDb({id: shipId}) is a Taffy query. It grabs the record with the given id. update(updatedShip) updates the data in that record.

You can use the same page for editing and adding. Tell the page what operation to perform. Set the page up during page load.

Woohoo! We have all the CRUD letters.